Ahhh what to say… it’s all over, done and dusted. 3000km later and the Te Araroa is complete. It’s only been two days since the end, but I’m already sitting at Queenstown airport ready to transition into my next chapter of life.

I slept on the side of Princhester Rd the evening I arrived at Highway 94 where I hitched into Te Anau two weeks ago, (one of my last resupply towns 200km from the end of the trail). I’d been expecting wind and rain that night as per the weather forecast, and it delivered just after midnight, keeping me awake for much of the night. The three days I spent alone after Queenstown were typical TA okay, but they simply reiterated what I’d already learned on this trail:

2. The best moments of my experience were those that were shared (namely with Tom & Will).

3. I no longer wanted any more alone time.

When I got into Te Anau after hitching with a couple of Danish boys I was feeling a little naff, happy that I’d navigated the previous section all by myself, but also not particularly looking forward to getting back to the trail. I wondered if it was just the ‘one week to go’ blues, but in all honesty, I didn’t want to face the trail alone, not again. The trail and I had had our time, and as much as I wanted to continue proving I could be a strong, solo warrior, what I was really craving was company.

When the sun came out late that morning I sat in the park to dry out my tent, and when Tom appeared moments later, I was overcome with relief. He was half a day ahead of Will and also Kess, who had joined the boys when they left Queenstown just a day behind me. It took them a couple of days to catch Tom and I, but once reunited we spent the final few days on trail as a family of four. 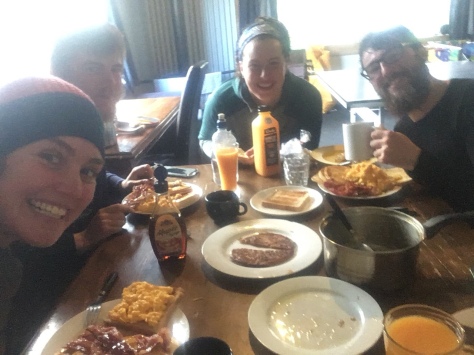 I was well and truly done with hiking by the end of this trail. I’d contracted some kind of stomach bug and my body was slowing down, while we still had to battle the incredibly muddy Longwood Forest Track, some steep farm hills, wet sinking beach pebbles, gale force winds, and long stretches of road and highway. On the final day Will and Kess steamrolled to the finish line, but Tom and I walked at a leisurely pace, which was all I could muster for the final 33km from Invercargill to Bluff.

Surprisingly, I was not that excited about actually arriving at the finish line. It had been pouring with rain, we were wet and cold, and the final farm track around the coast had been closed. Tom and I wandered through town after sitting out the major downpour under the entrance of a rugby club, and casually arrived at Stirling Point in the late afternoon to take photos under the iconic sign. 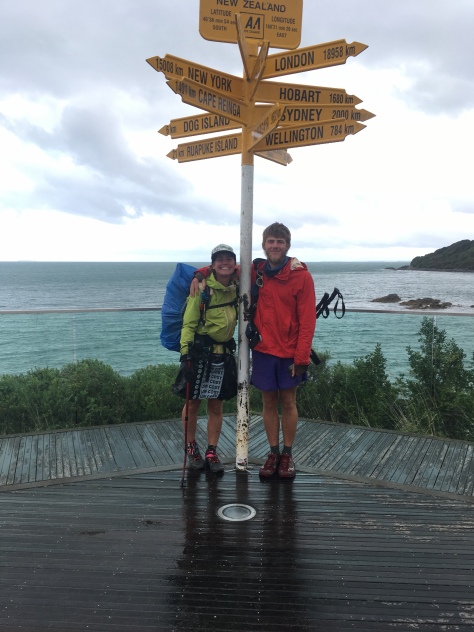 In my first miserable 700km of the TA I really questioned if I would make it to the end. I’d been so spoiled by the well groomed PCT that the rough tracks of the TA threw me. I wasn’t expecting them to be so incredibly steep, covered in roots and mud and requiring constant care and attention. I thought I would lose myself in thought while floating through miles of stunning NZ scenery. I imagined sleeping under the stars, wrapping myself in nature and losing contact with the civilised world. But the TA is nothing like the PCT, and it’s taken me ~3000km to finally appreciate that.

Hiking the Te Araroa is walking the length of New Zealand on every type of terrain you can possibly imagine. Many parts are overgrown, many parts are roads, and the actual tracks bar a few are technical and steep. It’s not a continuous trail, it’s a ~3000km route that utilises existing tracks, private farmland, beaches, 4WD tracks, highways, backstreets, footpaths, bike tracks, rivers, estuaries, stop banks, boardwalks, you name it, and it’s constantly changing. Those who’d hiked long distance trails before seemed to struggle to appreciate the TA the most (me included), but the first timers seemed to take everything in their stride, and because of their unbiased perspective, I was able to gradually shift mine.

I wasn’t overcome with emotion at the end, I was simply glad to be finishing with three wonderful people who will forever be my TA family. I learned more from these people than a ~3000km walk alone could have taught me, and without them I really wonder how I would have made it. Though I didn’t fall in love with the Te Araroa and would never choose to hike it again, I will always be grateful for its introduction to Tom, Will and Kess, who made this 4-month and 4-day experience truly unforgettable.